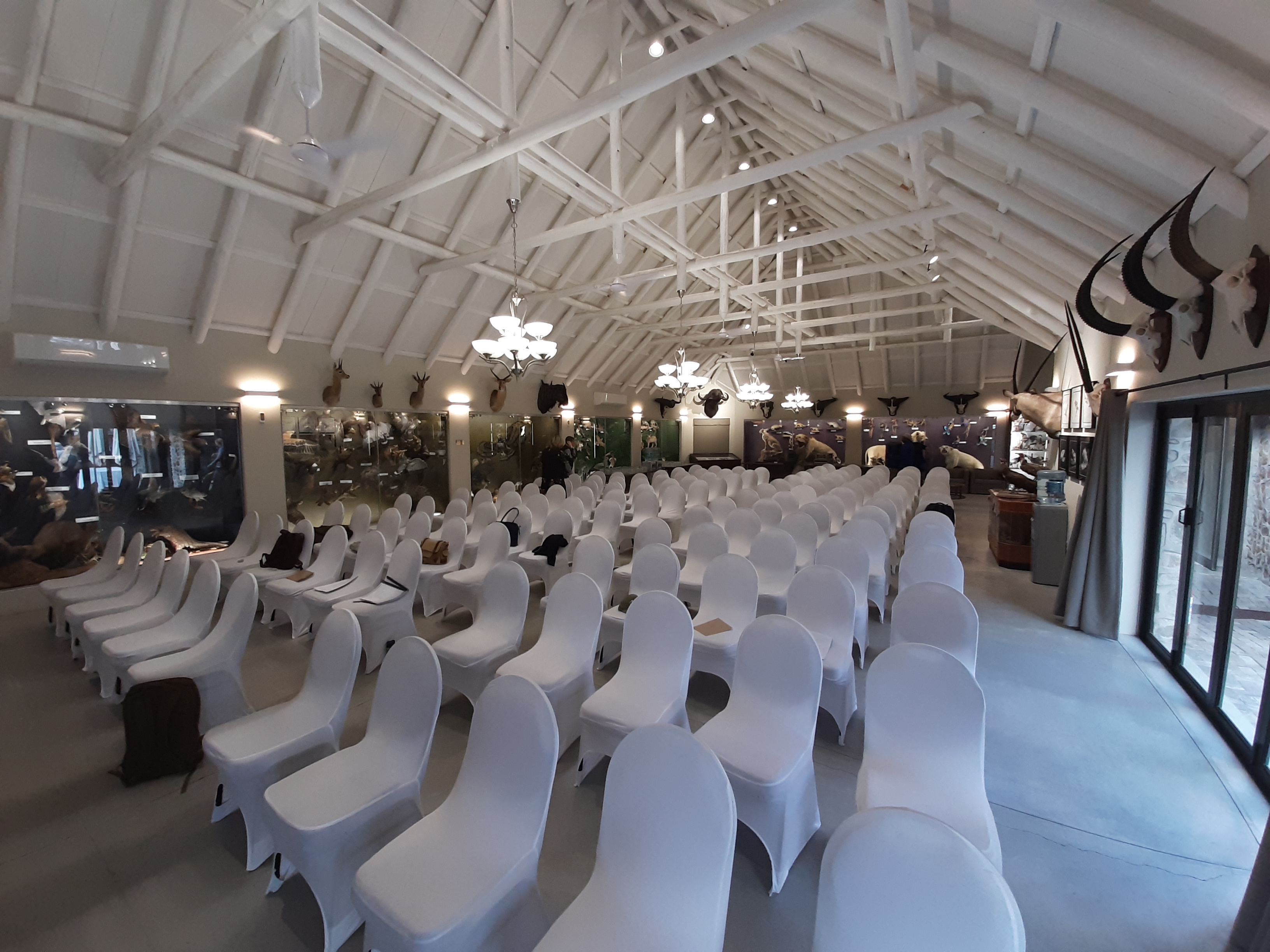 On 6 July 2019, the months of organization and preparation for the Timbavati Private Nature Reserve (TPNR) 64th annual general meeting (AGM) finally paid off, as D-day had arrived. For this year’s AGM the Timbavati management team took on a new approach. The TPNR has renewed its commitment to support rural community enterprise development. As a steppingstone, the AGM was a great starting point for local entrepreneurs to get exposure, and to awaken the “buy local” and “support local” spirit among the TPNR Membership. Our research partners, like Elephants Alive, were also given the invitation to join and showcase their hard work on the day.

The new approach did not stop there. This year was also focused on creating awareness of our collective environmental impacts and having a more eco-friendly AGM event. Recycling stations for glass, tins and other waste were set up for the AGM, single-use plastics were avoided for all items purchased for the AGM, and our caterers, Maroela Bar Hoedspruit, committed to sourcing at least 30% of their fresh produce locally.

The results were amazing! The eggs used in the pastries and biscuits were sourced from a local free-range farmer, and all of the herbs and lettuce leaves for salads were sourced from Hlokomela (a local healthcare NGO, which grows herbs and vegetables and sells them as part of their fundraising intiatives). All of the water for the AGM was provided using water dispensers and glass tumblers to avoid using plastic bottles. Delicious hot coffee was served by our local Hoedspruit Coffee Purveyors and shortly after the main meeting, Primrose Gin provided a great tasting selection of their local craft gins, with Safari wines having the wine & champagne ready on ice

Following the eco-trend, we had the privilege of not just one, but two Electric Safari Vehicles on display giving our members a drive to remember! These ultra-quiet vehicles are state of the art in game viewer technology and a future development that will change the face of EcoTourism. See more:

On to the three local businesses/ entrepreneurs who were invited on the day. These artists, crafters and businessmen shared their passion, skills and talent with our membership. Here is a short bio on each:

Nourish is a non-profit organization based along the Orpen road towards Kruger National Park. Within their Eco-Village they have five main divisions, namely Conservation, Education, Economic Empowerment, Tourism and Sustainable Farming.

Heading up their Economic empowerment division is Bongani Ngobeni who, himself, is a local entrepreneur striving to make a difference in his own life and the lives of others. Bongani assists and brings together the local crafts within the Acornhoek area, ensuring that the quality of each product matches the demand of the tourists and lodges within the area. The support shown towards Bongani and Nourish on the day of the AGM was truly heart-warming.

Bongani’s idea of having only high-quality crafts on display paid off as members and lodge managers enquired about how they could support him further. In addition, numerous purchases of the available crafts at Bongani’s stand were made, including some of the most unique hand-crafted animals made from (believe it or not) old engine gasket materials. We encourage all lodges, curio shops and other businesses in the Greater Kruger area to “support local” and to fill their shops and stores with these amazing products.

For more about the crafts that Bongani has on offer, contact him on 074 270 5098 and visit www.nourishnpo.co.za

Recolite came from humble beginnings - he identified a unique market which he knew would have a good supply and demand chain and began a business of creating animal hide rugs and carpets. Partnering with Conservation South Africa (CSA), he cleverly identified a low cost source of the cow hides, which were a by-product of the Meat Naturally programme. His training in hide tanning techniques by Life Form Taxidermists in White River, along with his experience as a volunteer in the TPNR meat processing plant, Recolite was able to produce quality cow hide products. More recently, and in addition to the cow hides, he has also begun receiving impala skins for tanning, a donations from the TPNR through their sustainable utilization programme.

Recolite told us the story of how his mother always said to him that he needs to keep his ‘stinky’ skins outside or throw them away. This happened regularly until one day, when his mother had no money to bring the family food, Recolite returned home with enough food for the week ahead. His mother asked where he had received the money and he simply said: “I sold my cow hide skins, mom”. From that day, his mother has supported him in every way with his business initiatives.

Rivalelo’s products are of great quality and compete with some of the best in the business.

Recolite now needs support with the provision of any old planks, old Jojo tanks, old drums and “tumbling” machinery in order to increase his productivity and turnover. From there he will be able to produce enough high-quality skins to grow his business to the next level. He was very well supported at this year’s AGM, making connections with some of TPNR’s top lodges and owners.

If you would like to engage further with Recolite, here are his details - mgomezulureco@gmail.com; 076 206 6156.

Both Vanrooy and Terrance are local artists from Acornhoek who started their art dream with very little technical art training. However, they both had the two most important ingredients - talent and ambition. These two young artists are currently being trained and supported by Seeds of Light (a non-profit organization working within the Acronhoek community to develop local business and leadership talent). Both Vanrooy and Terrance offer art classes to local schools, empowering the young children to express their artistic nature, and to allow for freedom of expression. Hoedspruit locals will be amazed to know that all of the wall mural paintings on the large concrete pillars at the entrance of the Kamogelo tourism centre were done by Vanrooy!

Bob Mnisi is also a local artist, operating a bit further south close to White River. He has a unique style and has won numerous awards for his fine artworks. He aims to gather exposure through ArtzAfrica which is an organization that has over 40 local artists on their database within Mpumalanga alone. They hope to assist local artists to find funding and to get exposure, in order to make careers out of their artistic talents. There is currently an exhibition happening at the Mbombela Gallery where a number of these artists are featured - do support them if you are in the area.

Even though these artists could not be present on the day, the main objective was for their work to be seen in order to get additional exposure…. and so they did! Lodges, businesses and galleries are encouraged to please “support local”. One of the ways to do this is to act as a visual host for these talented local artists.

Other events of the day

The TPNR field rangers also had some time to shine as they showed off their many hours of practice to perfect their discipline drills and skills. The formal drill display was followed by a short song and dance - a song that would lift the spirits of those in need and encourage them to continue the fight against poaching.

A strong connection was drawn between the display of these field rangers and the guest speaker of the day, Matt Lindenberg from the Global Conservation Corps (GCC). Matt’s message, in his address to the members of the TPNR, was about the need for wildlife and conservation efforts to make a mark on the young people of today, specifically those living adjacent to Protected Areas and Game Reserves. If the youth of today lose the passion and desire to protect nature, then the future of the Reserves and Protected Areas remains uncertain. Who would be there to take over from our field rangers of today if there was no recruitment of the younger generations, and who would be there to look after our Protected Areas if no effort was made to encourage young people to become rangers or conservationists?

Matt’s partnership with the Timbavati Foundation, has started an environmental education programme, called ‘Future Rangers’. It is a programme very close to his heart and to the hearts of the rangers within the TPNR.

A short sneak peak of the, soon to be released, documentary movie, ‘Rhino Man’ was also shown as part of Matt’s address. The amazing scenes from the documentary left “not a dry eye in the house” – even very burly grown men were wiping tears from their eyes. The TPNR has been actively involved in this film for over four years now and we cannot wait to see the final documentary, which will be screened at some of the top film festivals around the world - We would like to thank Matt for the tremendous effort that he has personally put into the production of this very important film

We believe that this was one of our most successful and eventful AGM’s. We believe there is an exciting future ahead, not only for the TPNR, but also for the local entrepreneurs who were showcased at our AGM.  Finally, we would like to extend a warm Thank You to Rudamans Hoedspruit, JVA Security and Maclin Power Fencing, the local suppliers who came through to display what they have on offer to the members of the TPNR

The Timbavati Private Nature Reserve would like to thank everyone who attended, participated and supported this past AGM. It was a huge success thanks to you!