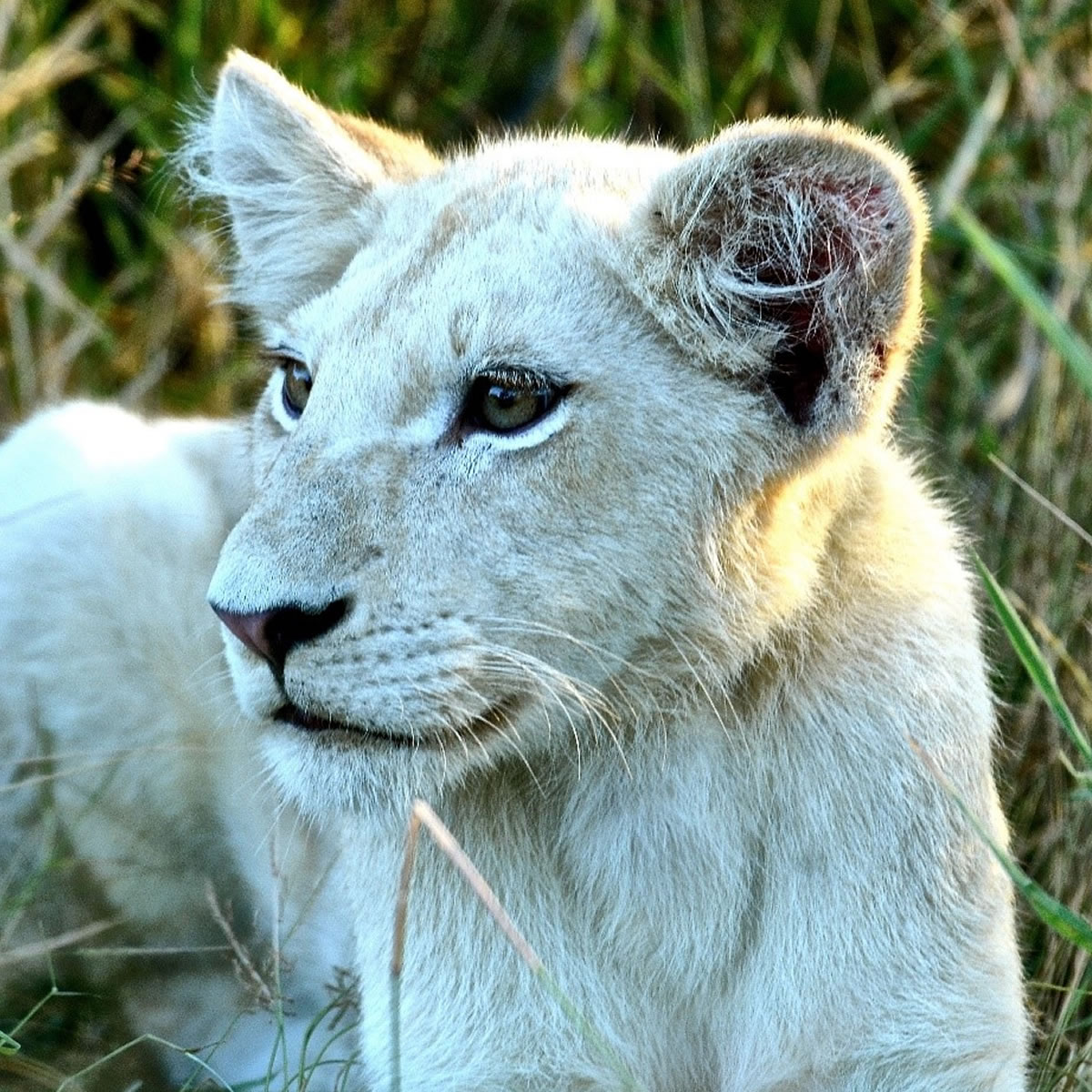 Phantoms of the bush; the white lions of the Timbavati

I wake at some ungodly hour, the luminous hands of my watch tell me it’s 2:30 am. I lie awake in the dark. Looking out through my bedroom window I can see stars twinkling in the heavens. Somewhere out there a lion roars. Can there be anything more evocative than the sound of a wild lion roaring on a dark African night?

My mind wanders, memories of encounters with lions in the Timbavati come flooding back. I remember one very clearly. It was late one afternoon; I was on my way back to my camp when something in the twilight gloom caught my eye. I grabbed my binoculars and looked - there it was, a tiny snow-white lion cub. I blinked in disbelief; it was the first time I had ever seen a white lion in the wild. Fascinated, I watched as this tiny creature played with its tawny colored siblings.

In the genetic analysis by Dr Desire Dalton and Susan Miller it was found that the Timbavati lions have a high genetic diversity. During lion censuses done over the years blood samples were obtained from 22 animals that were darted and sedated.

Dr Dalton looked specifically at nuclear DNA sequencing of the Tyrocinase gene - responsible for albinism but found that our white lions did not have this mutation.

Histo - pathological analysis of the eyes of both our brown eyed and blue-eyed white lions conducted by Dr Gonnie Behr at Ampath Laboratories, revealed a reduced, but not absent, melanin (pigmentation) concentration in the blue-eyed individuals.

So, our white lions are not albinos.

Dr Dalton isolated a white gene, which is a recessive gene for white lions and only expresses itself if this gene is inherited from both parents. The reason for the variation in lip and eye color is a differing expression of this recessive gene in different individuals.

So, the white lions of the Timbavati are not leucistic either.

Our white lions are also certainly not a separate sub - species as some people believe.

Over a period of nearly 30 years I have spent many happy days watching white lions in the Timbavati.

The white lions aren’t exceptions to this rule. By sharing some of those experiences with you I hope you’ll get some pleasure reading about these fascinating creatures

I once spent an enchanting afternoon with the white lion pride - 22 members strong, including two adult white lionesses and 4 white cubs. There were also a number of tawny cubs in the pride. After spending the early part of the afternoon snoozing, the cubs woke up and began to play. Leaping on each other, stalking each other, pouncing, wrestling, biting, fighting - they were furry little dynamos.

In the midst of all this action, a pair of black bellied korhaans suddenly landed right next to the pride, why they chose this venue to engage in courtship displays beats me - they’re not very bright birds! Instantly the cubs became hunters but were uncertain as to how they’d fare against the much taller birds. Fortunately, there was no Korhaan pie for dinner that night.

Later the sky darkened as rain clouds gathered. Soon it was pelting down with rain and the cubs sought shelter under whatever cover they could find. Soaking wet they looked so miserable. The rain passed, the sun reappeared, and playtime continued.

From time to time some of the cubs would approach my vehicle - lion cubs are very inquisitive - one even started gnawing at my tyres. It got dark and reluctantly I left. It had been a magical interlude to be privy to such awesome animals.

A few months after the magical interlude with the pride I came across them again late one afternoon. They were feeding on a buffalo carcass. There were 17 together, but the two dominant males weren’t there.

All seemed well and as it got dark, I left them to it. The next morning, I returned, the lions had left and in their place were 13 hyenas scrapping over the remains. After an hour I left and as I moved off was horrified to see two of the cubs out in the open - a tawny cub and a white cub.

I watched them through my binoculars and could see something was wrong. Neither of the two seemed able to walk. It appeared as if their hindquarters were paralysed. My first thought was that they’d been bitten by a large venomous snake. After waiting a few hours, it became apparent that both cubs had died. I went to have a look, neither of them had been bitten.

Foolishly I scouted around the area and came across another white cub. It was alive - barely so. I knelt next to it and it looked up at me and made a pitiful meowing sound. It was heartbreaking. Shortly afterwards one of the adult white lionesses returned, not sure how welcoming she would have been had she found me next to the dying cub...

The day after 4 more cubs were found a few kilometers away, all dead.

A postmortem revealed that all of the cubs had suffered massive subcutaneous bleeding. The probable scenario was that nomadic males in an attempt to overthrow the dominant pride males had killed the cubs by either swatting them or crushing them with their massive paws.

Hope for the future

A few years after the tragic deaths of the cubs both adult white lionesses were also killed by marauding male lions. Sadly, one of them was pregnant. I told you lions don’t have easy lives.

Then a few months ago the warden of the Timbavati sent me some pics of 2 white lion cubs that have been seen regularly a few kilometers east of my camp.

Once again, the white lions of the Timbavati have returned.