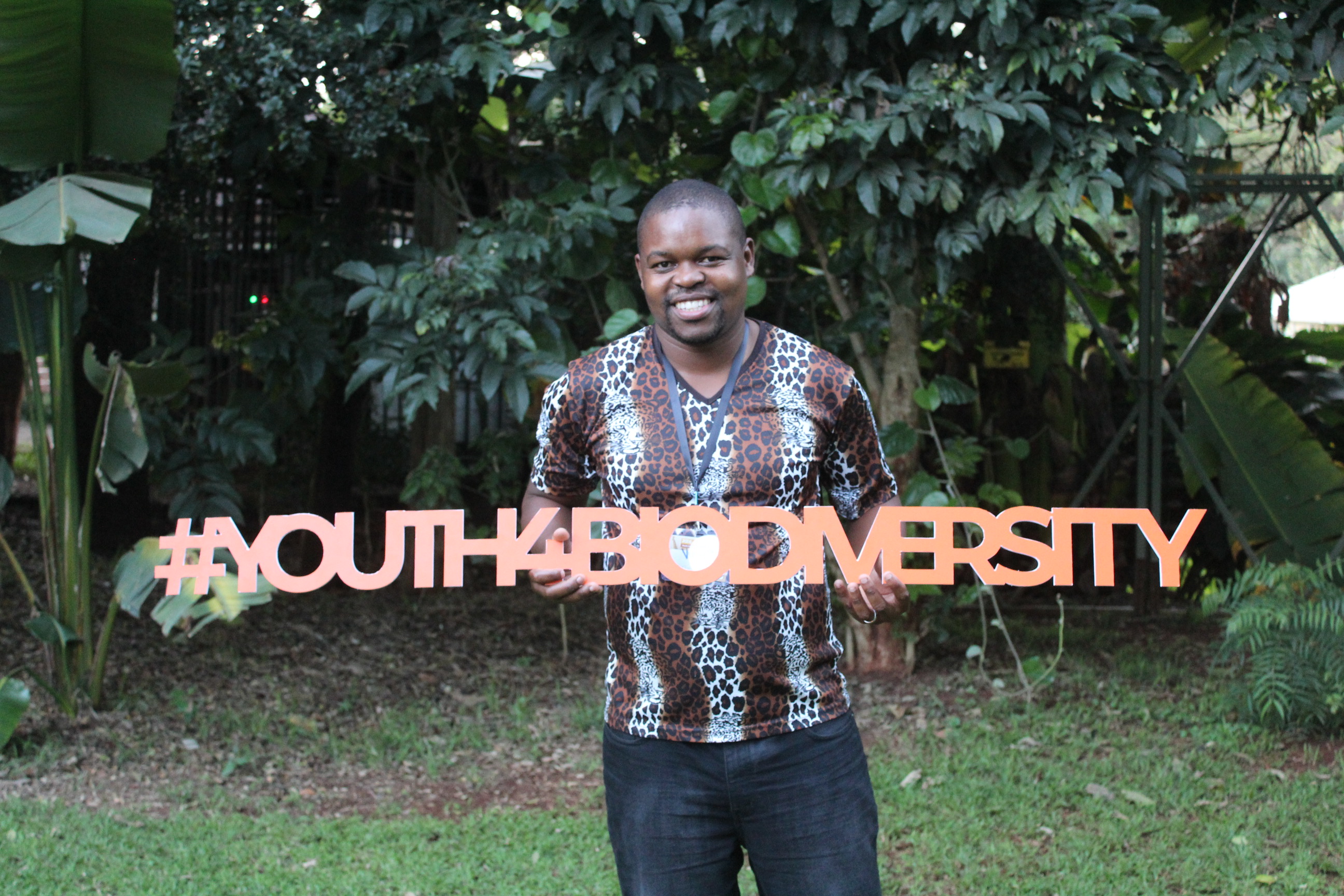 Guest blog: Instilling a conservation passion & awareness within the Kruger to Canyons Biosphere through the Environmental Monitor programme

Where it all started for Vusi

When I was a young boy, every school holiday I would go to visit my grandfather on his farm where he looked after several different animal species. I there took the role of being the herds boy for his cattle and a helper for gathering firewood and water for the community members. All the time spent on the farm made my realized that I had an inherent love for animals.

One day, I noticed our donkeys where returning home with cuts and slashes on their bodies, I then realized the cause was people not wanting the donkeys to eat their harvests that had been planted. This first hand experience of animal abuse made me angry and I went to my uncle and asked him if there were any police who could assist in this matter, I wanted to report this cruelty; he simply replied saying there was but they would not take it seriously. This is where, at my young age, I decided that I wanted to be a police officer who would take a stand to protect animals against abuse and be involved in conservation in order to protect them from further harm. I also knew that people needed to be educated about wildlife as there was major conflict between wildlife and the communities, such as the hippopotamuses that lived within the river.

In my mind, the only way that I could be able to pursue a career in what I was passionate about was to be a conservationist.

This is what I want to do but how?

My parents could never understand why I wanted to go into nature conservation, they questioned how would I survive on the low income, they questioned and voiced how dangerous the occupation is, and even went to the extent of having me see two psychologists as well as two professional business men to try and get some sense into me. But in all four meetings, they asked me “Why do you want to pursue this career path?” and with my answer they could see and hear the passion I had.

I then signed up with the Tshwane University of Technology for a Diploma in Nature Conservation. For my experiential learning year, I was privileged to work with the South Africa National Parks (SANParks) game capture unit in Kimberly, where I was inspired by my manager at the time. He was a man of no formal qualifications, a man who had a wealth of knowledge on everything and anything. To know that he built himself up from being a gardener to a manager of the operation gave me the motivation to want to be more. After this time spent there, I applied for a number of positions with various institutions throughout Hoedspruit, such as being a field ranger with Protrack Anti-poaching unit, being a bush law teacher at Southern Cross Schools, programme coordinator at the Global White Lion Protection Trust and lastly I became an Environmental Monitor (EM) for Nourish non-profit organization.

At this point, I was introduced to the Kruger2Canyon programme (K2C), where they involved the communities in conservation awareness. Even whilst I was still an EM at Nourish, the K2C would make use of me to facilitate workshops and educate other EM's as my passion for conservation was ever so strong. A position within the K2C opened, I applied, and I was recruited as their data collator. My networking and relationship building only saw me grow from strength to strength, where I now stand on several boards within various programmes to fulfill my community conservation passion.

What is the Environmental Programme?

The Environmental Monitor (EM) programme was initiated in 2010 by the Department of Environmental Affairs (DEA) in response to challenges of high levels of unemployment adjacent to conservation areas, coupled with increases in the illegal wildlife trade.

In the 2016-19 cycle, SANParks’ Biodiversity Special Projects (BSP) are responsible for the implementation of the national programme, while the DEA Environmental Protection and Infrastructure Programme (EPIP) Project Manager provides operational direction and programme accountability support.

The national programme uses a cluster approach, of which the K2C is one cluster, with approximately 20% of the national number of EMs allocated to this cluster.

What is a biosphere?

By definitions, a biosphere reserve is an area of either or both terrestrial and coastal ecosystems promoting solutions to reunite the conservation of biodiversity with its sustainable use.

K2C has 1.4 million hectares dedicated to long-term conservation (898 300 of formally protected area and 400 000 ha of private owned conservation land). The entire registered Biosphere Reserve area is 2.5 million ha. The biosphere, stretching in both Limpopo and Mpumalanga, which extends from the fences of the Greater Kruger areas through to the ‘canyons’ or mountain rangers.

Where are the Environmental Monitors?

Remembering that this is a National programme, EMs are deployed throughout the country. In 2010, 30 EMs where recruited within the K2C around the Sabi Sand Wildtuin, by 2018, 306 out of 1500 EMs nationally were deployed & taken on by seven contracted Host Institutions (HI), such as the Timbavati Private Nature Reserve.

The following map indicates the locality of the different Host institutions/Community Groupings and their EMs:

The initial deployment of the EMs were selected at areas of high human impact (community areas adjacent to protected areas) and high biodiversity importance (mountain catchments). Any ecosystem services such as rangeland restoration and invasive alien plant clearing prgrammes where done through the Natural Resource Management Programmes (NRM) which are too funded by DEA.

There are two types of EMs namely, community-based EMs and protected/ reserve area based EMs.

The role of an EM can be split further into three sections namely:

The following diagram depicts the function ratios to the number of allocated EMs:

Here are a few photographs of the EMs during their day to day activities:

What do you see as the future for the EM programme?

The K2C has an exciting future as this programme continues to evolve. I know that the K2C region has the been recognized as the one of the most successful areas for the EM programme and it is something to be proud of. As K2C, they strive to get to a point where the dependency on DEA funding is reduced and have a sustainable model for the programme to continue if funding is ever removed. The value of this programme has been seen, and for it to be stopped because of lack of funding would be a huge loss.

The data that is collected in field is so valuable, it has changed the way in which we have worked within the community landscape, it has allowed for us to learn from the area on what the area needs and wants, as well as the do’s and don’ts.

These questions have assisted us in seeing if there has been an impact:

Did the Programme bring about the envisioned change?

Envisioned change was taken as qualified in the main aim of the National Environmental Monitor Programme of “To increase conservation capacity in the landscape in and adjacent to the Protected Area System whilst improving human well-being”. It was established that both the EMs and the HIs’ perspectives supported an affirmative answer.

Did the Programme do what it said it would do?

By tracking the performance against the objectives and targets, the conclusion was drawn that, indeed, the K2C Cluster EM Programme did what they said they would do.

The K2C EM Cluster was very privileged to be offered the opportunity to work with DEA EPIP and SANParks BSP in delivering the envisioned change. The Host Institutions, Community Institutions and EMs (the network) also expressed their collective gratitude. Despite it being 6 years in the making – the K2C Cluster feels that it only started to achieve the change that is necessary for contributing to sustainability in the landscape. As the K2C BR is positioning itself to be a Greater Limpopo Transfrontier Cluster as well, it is humbly requesting the opportunity to continue to improve on EM Programme implementation for collective outcomes.

Vusimuzi Job Tshabalala is a young local conservationist with the passion to protect and conserve the natural environment. He has dreams of one day owning his own reserve where he can possible act as a host institution for the EM programme. He is also a pastor at his local church, Filadelphia Church of God, and a chair person for many different influential forums within the area.

*Some text within the blog is courtesy K2Cs annual report of 2018.