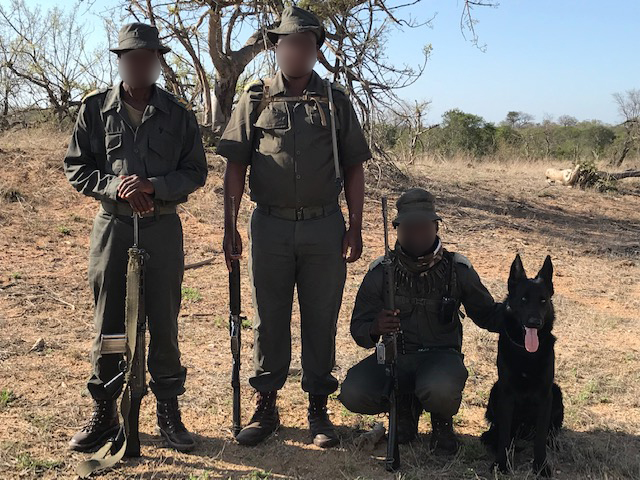 The African bush can throw all kinds of nasty things at you when you’re out on an anti - poaching patrol. But when you’re a highly trained canine ranger like Akhal you learn to take it in your stride.

Akhal is an Alsatian, owned and deployed by the Timbavati Private Nature Reserve. His responsibility is to help track down poachers, especially those that after rhinos, in our reserve.

When he was 6 months old, he underwent rigorous, sophisticated training that lasted one and a half years! His handler ****** (for security reasons we can’t disclose his identity) has also undergone intensive training, including how to get the most out of their relationship. Together they have been trained to search for suspects in open areas, buildings as well as short on-leash attack and long-distance apprehension. Most importantly they have been trained to work as a team and they have become inseparable.

Akhal has got a nose for picking up human scent trails up to 6 hours old. His sense of smell is thousands of times keener than a human. Typically, Akhal has 300million olfactory receptors in his nose, compared to about 6 million for humans. And the part of Akhal’s brain that’s devoted to analysing smells is, proportionally speaking, 40 times greater than ours. That means that once he latches onto a poacher’s scent trail, he’ll stick with it and lead his handler and the support team to that poacher; come hell or high water.

In a skirmish, Akhal signals when they’re close to the poacher(s) by either sitting or lying down. That’s when the specially trained task force takes over. Should the poachers make a run for it, Akhal is unleashed and is trained not to let go when he grabs a leg or an arm. Poachers try all kinds of tactics to confuse the dogs - including throwing poisonous meat or chilies on the trail. But Akhal is trained not to eat food on the trail and simply makes a detour around the chilies.

Akhal and his handler work a 12-hour day, starting at the crack of dawn. He’ll probably have a working life of 6 - 8 years before he goes on pension. He started working in the Timbavati when he was two. The reserve has 5 of these highly trained canine rangers - some are Alsatians, some are Malinois, a Belgian breed

And they all have different personalities:

Every month, the dogs and their handlers get special training for a week.

If you’d like to sponsor Akhal or one of his workmates, or just make a donation towards their upkeep, contact Krystle Woodward at office@timbavati.co.za

We’re currently looking to fit the dogs with special bulletproof vests, unfortunately they cost about R10000.00 each. Special “bite suits” for their training would also come in handy. Or maybe you just want to acknowledge the great work our dog teams are doing by sending them a “well done” message.