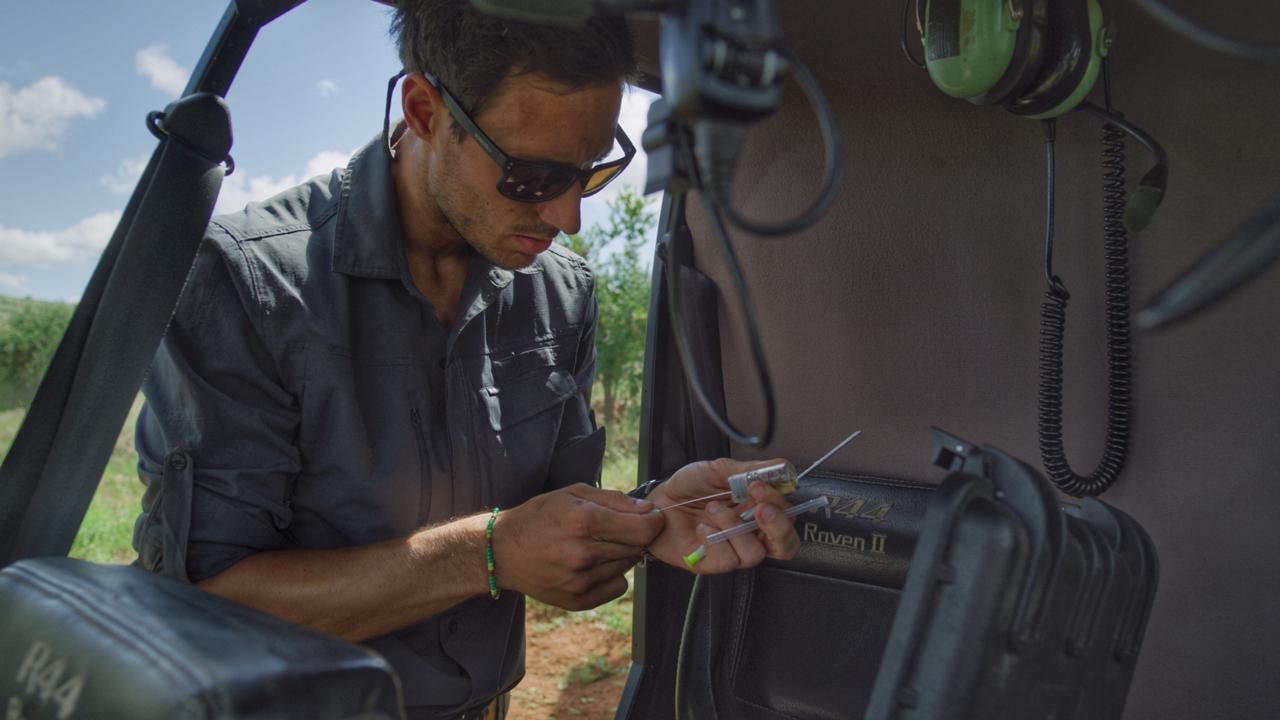 Guest blog – A day in the life of a Wildlife Veterinarian – Getting to know Dr. Joel Alves.

This month's guest blogger for our Conservation Conversation is an up-close and personal interview with a young, energetic, and passionate wildlife veterinarian who aspires to learn and grow from every experience he encounters. He not only aims to go beyond just being a vet, but he also aims to make a positive contribution & difference in the world of conservation.

Q1: Tell us a bit about your background and what made you become a wildlife veterinarian?

I grew up watching David Attenborough, John Varty and Joubert’s documentaries. The documentary ‘Eternal Enemies’ inspired my first nightmares. I can only imagine that is where my fascination for the bush started. My first “what do you want to be when you grow up” choice was a game ranger. Then sport got in the way. Then a bit of traveling and next thing I knew, after a gap year backpacking in Europe I was studying Sports Science at the University of Pretoria (UP). Being a typical guy, I’d gone through the list of what you could study at UP and couldn’t believe studying sport was an option. Seeing what my ecology and zoology friends were studying brought back those early passions and I changed the following year to a BSc Zoology. From there, followed what can only be described as a series of very fortunate events and uncanny moments that brought me to where I am today.

Sometimes I still reminisce and think, how the heck did I get here.

Q2: What has been your most exciting and rewarding treatment/capture?

In a short space of time, I have been privileged enough to be involved in a number of rewarding conservation projects. To date, my most memorable memory involved three wild dogs, a very large papaya fruit, Grant Beverley of the Endangered Wildlife Trust, Jaco Scheepers as our pilot,  and we were on a mission, flying across the country to translocate these beautiful creatures, however with a little unexpected change of plan along the way...

We were en-route from Tembe Elephant Park to Tswalu Kalahari Reserve and had just stopped for a refuel in Frankfort. Unfortunately, due to some adverse conditions, we struggled to gain lift on take-off and Jaco, saving all our lives, made the decision to put us down in a field just beyond the runway, only barely getting us underneath the multitude of power-lines in time. We rattled and rumbled across the field, through a massive fence, across the main tar road, checking left and right before crossing and eventually came to a stop after hitting a street lamp on the other side and swinging around 180 degrees. We all scrambled out of the plane as fast as we could, of course bringing the wild dogs out with us and dragging them to safety.

We were eventually saved by “S”. “S”, for Mr. Swart, who arrived on the scene with an offer of another plane and to immediately take-off and head to Tswalu from his private strip. A quick zip across town in a “mom-mobile” (Literally, a kind lady with a big van who was happy to leave her kids waiting at school because, in her words, this was the coolest thing she’d ever done) and we had the dogs loaded onto their new transport. Nine and a half hours later we woke them up in their new home and we watched the Kalahari sunset with the sweetest whiskey we had ever tasted.

The unusually large papaya fruit survived unscathed and made it back to Hoedspruit with us, becoming symbolic and ensuring that the proverbial ‘Paw-Paw’ did not, in fact, hit the fan on this occasion.

Q3: What has been your scariest and most dangerous treatment/capture you have ever done?

Without a doubt, darting forest elephants in the rainforests of the Congo Basin. A three-day trip just to get to Odzala-Kokoua National Park in the Republic of Congo culminated in a 10-hour boat trip in a dugout with an outboard engine, through a wilderness area the size of Kruger with not a single road. Smack bang in the middle, I spent two weeks tracking and attempting to dart forest elephants to fit satellite tracking collars. Easier said than done when trying to do it in a rainforest with elephants who have been heavily persecuted by people. Darting involved leopard crawling within

10-15m of them so that you can see enough of it to dart through the thick foliage. If not leopard crawling it was balancing from trees, trudging through swamps or simply trying to sneak up on them by any means necessary. Worst case scenario they get a whiff of you and just bolt resulting in thunderous sound and not knowing if it’s coming at you or running away from you. All there is, is sound and bush exploding around you. They’re not necessarily coming for you but just running and you dive under the best thicket you can find or the nearest big tree to huddle behind.

It was the most unreal and challenging work I’ve undertaken but it was an incredibly unique opportunity and privilege to work in a wilderness like no other I have visited, on a species that few have the chance of seeing, let alone working on. It was an adventure I will always cherish and would return in a heartbeat.

To be honest, many people reckon we have the most high-octane lives, rushing around in helicopters and planes, doing the most epic and exciting stuff whereas in truth, the reality is far less flashy. There are hours upon hours spent on the road and when not sitting behind the wheel of a car we’re sitting behind a laptop or with a phone glued to our ear, tackling mountains of project admin and organising so that we can do the cool stuff mentioned above. A typical day is 95% admin and travel with 5% exhilarating madness and epicness out in the field. We live for that 5% though which makes the boring stuff all worth it.

Q5: What is your favorite animal to work with?

It would be near impossible for me to single out one species. I gain an immense amount of satisfaction working with wild dogs, elephants, giraffes and black rhino. Wild dogs because they’re our most endangered carnivore and working with them is an incredible privilege especially as it is usually with the Endangered Wildlife Trust who are doing amazing work in their conservation. Elephants, as it is always a humbling experience working with them and they’re one of those special species that always strike a chord in people. Black rhino, simply because they’re all attitude and character and inevitably never make capture easy. Lastly, giraffe, as unlike other species who simply “fall asleep” with the immobilisation drugs, giraffe need to be roped down and secured after darting. There is always a story to tell after a giraffe capture.

Although I can’t really count them as a species I work with outright because I barely know what I am doing with them, but working with my close friends Kyle and Carrie from the APNR Ground Hornbill project has been one of my favourite experiences. The same applies to working with the EWT’s Lindy & John on their vulture work. Incredible people doing amazing work for these lesser-known wildlife gems.

Q6: What is your least favorite animal to work with?

It is still early days in my career but I have not yet come across a species I haven’t enjoyed working with.

Q7: What is your favorite downtime activities?

What is downtime? 😉 I thoroughly enjoy cooking, photography, camping and most sports. Unfortunately, there isn’t too much opportunity for team sports out this side of the world so most often I’ll be swimming, running or mountain biking.

Q8: Do you have any bucket list items you wish to achieve in your life still?

Far too many to list. They also range from ludicrous to that’s simply not going to happen in this lifetime, like darting Polar Bears or Wolves but one can dream. Traveling for work to any new country is always a fresh adventure so any opportunity to work in a new place with a new species is exciting and therefore there are a number of places high up on my list, such as Chad or Cameroon for example. Keeping it closer to home and more realistic, I’d love to be involved in a large-scale, cross border elephant or black rhino translocation

Q9: Where do you see yourself in the next 10 years from now?

I’ve always been one of those people that doesn’t look too far ahead and like to live in the moment and see where I end up, so I really do not have a clue of where I’ll be in 10 years'. If there is one underlying driving force, it is that I would like to strive towards being more than just a vet. When it comes to conservation, there is so much more going on than just darting and translocating an animal or putting a collar on or whatever it may be. Positive change and the real difference is made behind the scenes and not out in the field on the day. Ten years from now, I’d love to have the experience that comes with 10 years in the industry while still being a constant student. I’d love to look back knowing I've made a positive contribution to conservation, no matter how small and if along the way, I’ve inspired some people, shared whatever knowledge I’ve gained, accumulated some solid fire-side stories and darted a polar bear, then I can look forward to the next 10 years after that.

Q10: If someone aspires to become a wildlife veterinarian, what sound advice could you give them about the industry, and for them personally?

I’m not kidding when I say at the end of all the hard work, the really good timing and luck thing goes a long way. Where possible though, use every chance and spare moment to immerse yourself in the industry. Attend courses, conferences and workshops focused on wildlife. Spend your electives working with wildlife veterinarians as much as possible. If there is a chance to jump onto a research project or help out with some random wildlife event, jump on it. Opportunities are born out of these experiences and the people you meet along the way.