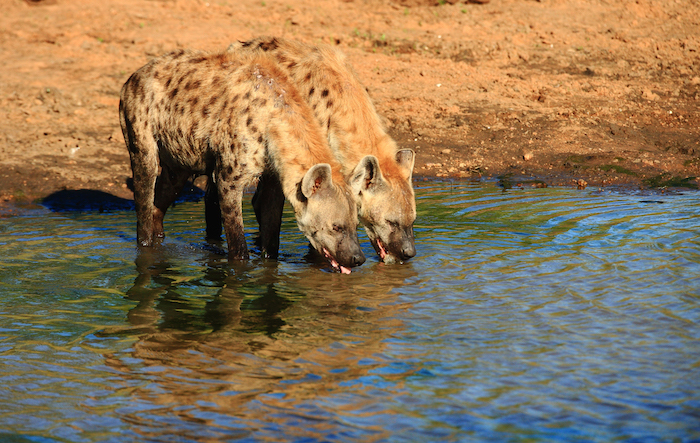 Fascinating facts about the Spotted Hyena

The spotted hyena is a remarkable predator. They are highly skilled and intelligent hunters that will also eat birds, snakes, lizards, insects and plants.

There are three different hyena species, with the spotted hyena being the largest of the three. Brown and striped hyenas are the other two species. Although hyenas may appear to be similar in nature to dogs and share certain characteristics, they are actually more closely related to cats.

Spotted hyenas are located in sub-Saharan Africa, found in areas such as the savannah, bushveld and desert. They are the second most dominant group of predators after their immortal enemies - the lion. Spotted hyenas live together in large groups called clans that may include up 80 individuals. The females dominate and lead the clan as well as outnumber the males. The alpha female is normally the oldest and most experienced member of the clan. Her young are of high ranking and will often take over leadership should their mother die.

Hyenas work in packs to isolate an animal, generally one that is ill, weak or old, and hunt it to its death. The victors often fight over the kill, either among themselves or with any other animal that may try their luck at getting involved. Spotted hyenas are also known as 'laughing hyenas'. They use these distinct callings when dealing with conflict, such as fighting over food or to determine a hyenas social status and standing. A strict social hierarchy is in place within every clan.

Spotted hyenas have excellent hearing and sharp eyesight at night. Their enlarged cavities accommodate the heart and lungs, which allows them to run for longer distances and maintaining a constant level of stamina. Their unique shaped body that slopes from the neck down, with larger and sturdier forelegs, allows them to support their muscular neck and head.

The spotted hyena is equipped with an extremely powerful jaw and strong teeth. They have the strongest jaw in the entire animal kingdom in proportion to their body size. That's why they are more than capable of crushing and grinding even the largest of bones. They have an off-white to light brown coloured coat with black markings on their body and legs.

Hyenas are not always that easy to spot or track while on a game drive due to their unpredictable nature. However, they always seem to put on a show and never fail to entertain. They are definitely a crowd favourite and certainly an unforgettable sighting. A hyena is right at the top of Africa's predator list among the likes of lions, leopards, cheetahs and the wild dog.