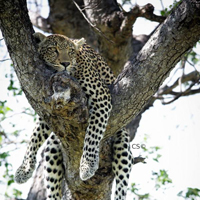 An exciting start to the year!

January saw a month of much needed rain, the making of new life and the birth of new life.

Seasonal breeders were everywhere to be seen. For those that are not sure what seasonal breeders are here is a brief summary. Seasonal breeders are animal species that successfully mate only during certain times of the year. These times of year allow for the births at a time optimal for the survival of the young in terms of factors such as ambient temperature, food and water availability, and even changes in the predation behaviours of other species.

We were pleasantly surprised on one of our game drives at the beginning of the month. It was an overcast early morning game drive, perfect hunting weather for what we were about to experience. The pack of 30 wild dogs that we saw in December were back and they were on a mission. They killed and ate three impala and then straight afterwards they killed a young waterbuck. All of this in a time period of only 40 minutes!! Once we left the sighting they apparently caught another young impala. Four impala and a waterbuck before 7am! Incredible. 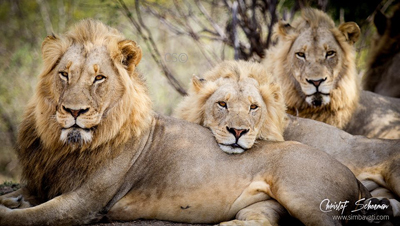 As the days went by we managed to catch up with the various leopards that we follow on a regular basis. We saw Nthombi and her two cubs, Umfana (male) who is Nthombi's first born cub and Ntsongwana (mbilu) male who is Ntombi's second male cub. Nthombi's first born Umfana is really showing that he is becoming one of the dominant males in the area. It was great to see him on a small buffalo kill which he took up a Marula tree. We were also relieved to see Xiviti our resident leopard. He disappeared for three weeks and we were really worried about him.

The elephants came close to the lodge on a couple of occasions. It is always great to watch them swim, sleep and play. One of the highlights of the elephant sightings for us was when a young boy was trying to intimidate our vehicle with all the courage that he had. 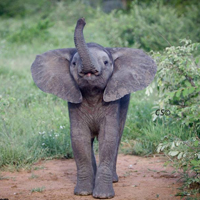 Lion activity increased in January. The Jacaranda Males moving through with heartfelt presence! On the 9th of January the Jacaranda 4 were about 400m from the Timbavati Pride. Luckily for them they didn't bump into these Big Jacaranda Males!

A new pride also came through the area. This bad boy charged both vehicles in the sighting with the trackers moving from the front of the vehicle right into the passenger seats. Out of hundreds of lion sightings, this only happened twice in 6 months. We would also like to take this moment to reiterate that at Simbavati River Lodge take every precaution necessary to ensure the safety of all our guests and staff at all times and that no one was in any danger at any time when the lion charged our vehicles.

This January we decided to do something out of the ordinary. We treated some of our guests to a special pancake stop in the bush. A good time was had by all. Who knows we could surprise you, our readers with something as delightful on your trip to Simbavati River Lodge. 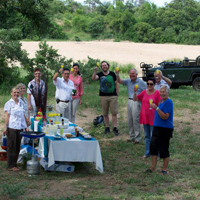 We would like to take this opportunity to thank everyone who entered and shared our Facebook competition. We are looking forward to welcoming the winners to our lodge.

With every beautiful sunrise in the bush comes an equally beautiful sunset and with that we bid you farewell until our next post.