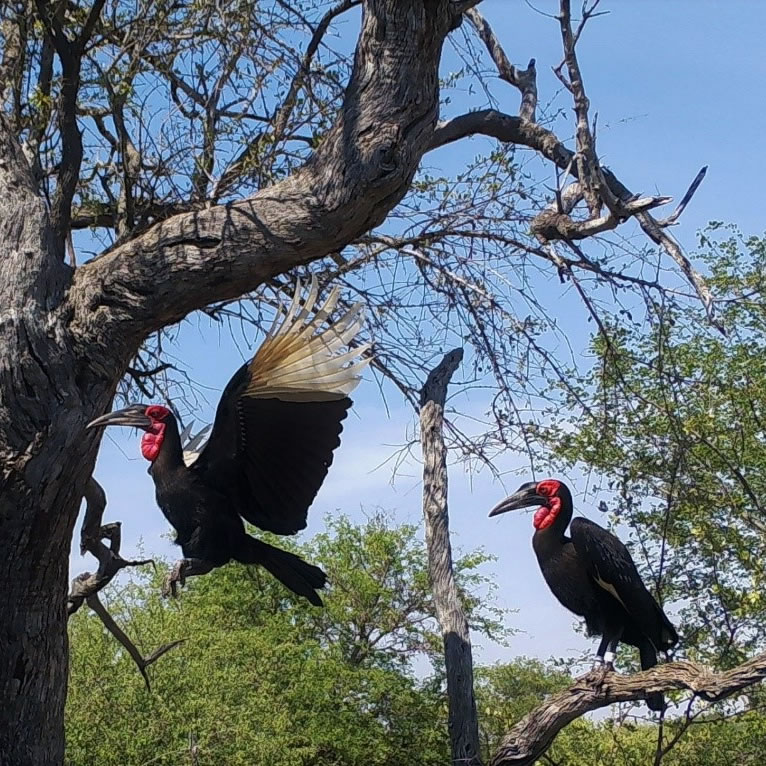 Guest blog: The booming call of ground hornbills. What are they saying?

According to the Zulus, who call Ground Hornbills iSingizi, this is what they say when they call.

First the female calls:
“Ngiyemuka,ngiyemuka ngiya kwabethu.”
(I am going away, going away to my people)
To which the male answers:
“Hamba, Hamba, kad’usho.”
(Go, go you’ve been saying so for a long time)

About the Southern Ground Hornbill

Southern ground hornbills (SGH) are classified as ‘Endangered’ in South Africa. Over the past 100 years they have experienced up to 70% decrease in their natural occurrence and, due to high site fidelity, their population size. They are the largest cooperatively breeding bird in the world with groups of around 2-11 birds, requiring large territories. They defend these territories with iconic booming calls at dawn, particularly in spring at the onset of the rainfall season, which triggers breeding.

The breeding of these birds is extremely slow with the average fledging success per group being one nestling every 9.5 years. This slow reproductive rate makes them a difficult species to understand and the only way to get to the bottom of their behaviour and physiology is through long-term research.

Who are we and what do we do?

Since 2000, students at the Fitzpatrick Institute of African Ornithology have been investigating southern ground hornbill habitat use and reproductive success, largely to inform activities of the Mabula Ground Hornbill Project (MGHB) and the National Ground Hornbill Working Group, who are our partners in implementing the National Species Recovery Plan and a recently compiled Biodiversity Management Plan for the species.

With all ground hornbill researchers and conservationists around the country working together to slow and reverse the decline in numbers, the Associated Private Nature Reserves (APNR) forms a large part in the process, comprising of both tried and tested conservation practises, as well as the latest research on the species.

SGH nests are a very infrequent occurrence in the lowveld due to nest requirements; large trees with open cavities, more than 4 metres from the ground. This was realised in the early stages of the project when researchers began to install artificial nest sites throughout the APNR and resulted in the ground hornbill population steadily increasing since then. These artificial nests are strategically placed in each groups territory and are consistently maintained and monitored for breeding.

Luckily for the birds, their breeding habits are ideal for the conservation process. The female lays two eggs, yet invariably rear only a single chick. The second hatched chicks succumb to dehydration after a few days, having been largely ignored by the incubating female. This allows us the opportunity to harvest these second hatched chicks which can then be reared and reintroduced back into their historic range, all without having an impact on the source population.

Through the long history of the project, there have been several researchers come and go, each with their own interests and observations. Initial research by William Wyness looked at the home range size of the birds, revealing that these range between 55 and 105 km2. Blair Zoghby then took over and studied how the birds utilised their habitats to see which areas were being preferred. During this period of research, it was found that open areas near the nesting sites resulted in an increase in the breeding success of the groups.

More recently, Kate Carstens completed her PhD on the effectiveness of the artificial nests on the ground hornbill population of the APNR, finding that they have been a significant tool for the marked population increase. These are a very brief overview of some of the main findings with there being plenty more valuable information gained from each. The research being conducted today has taken a step in another direction to help the birds. It is focusing on the social structures of the birds to see how the different individuals within the groups contribute towards the vital group functions of territorial defence and reproduction.

We are also delving into the possible impacts of changing temperatures and rainfall patterns and how this might affect the reproduction of the birds. This latest research will provide us with a deeper understanding of the social system within the ground hornbill species. This will aid conservation practices through identifying individuals which are key for the survival and success of the group, aiding the release programmes run by the MGHP.

What the project has accomplished

Nearly all the groups throughout the APNR have a sole artificial nest where all of their breeding takes place. Through the history of the project, these artificial nests have fledged over 100 chicks, resulting in the area being one of the strongholds for the southern ground hornbill population in South Africa.

We are also now seeing birds dispersing from the APNR to populate the surrounding, less populated areas. With the installation of these artificial nesting sites, we have seen the breeding success increase from one fledgling every 9.5 years, to one fledging every 3.5 years per group, nearly three times more successful than the rest of the birds around the country. Since 2010, we have harvested 31 second-hatched chicks that have successfully been reared for the reintroduction programme. Many of these chicks have since been pioneering birds for establishing populations where they used to occur within the country.

Ground hornbills of the TPNR

Currently in the Timbavati, we have roughly about 50 different ground hornbill individuals. These birds make up 14 groups, each with a single artificial nest installed over the past two decades. These groups have also supplied 17 second-hatched chicks towards the reintroduction programme.
The reserve is also home to one of the most successful groups of ground hornbills, Karan Khaya. This group has successfully fledged 12 chicks in the past 15 years since their nest was installed.

While we monitor the birds as best we can, being able to keep track of every group within the reserves throughout the year is a near impossible task for our small team. Any sightings we receive from the public about where and how many birds were seen, provides us the opportunity to follow the different groups and their movements. We obviously also appreciate any photographs of the birds.

Unfortunately, our trusty old vehicle is no longer safe or financially viable after nearly 20 years on rough roads. We are urgently looking for any donations towards a new vehicle. With the breeding season just around the corner, we must get back into the field and keep up with our research and conservation. Anything will go a long way and donations can be advertised on the vehicle itself, as well as on our website and social media.

"Our trusty old vehicle is no longer safe or financially viable after 20 years on rough roads. We are urgently looking for donations towards a new vehicle. Breeding season is around the corner..."

If you have any sightings or are willing to donate, please contact Kyle-Mark Middleton at nghututu@gmail.com or call 0713258956.

Kyle-Mark Middleton is a PhD candidate at the FitzPatrick Institute of African Ornithology. He has been managing the ground hornbill research and conservation project within the APNR for the past three years and his passion is conducting valuable research to assist ongoing conservation programmes and management plans.